- Registration of tips begins after the horses running are determined.
- Tips can be registered for all races held by HKJC.
- You can register as many tips as you want up to $1,000 per race.
- The deadline for registering tips is 1 minute before post time.
- Registered tips can be changed as many times as you like up to the registration deadline or until you fix it. Click Revise to the side of a race you wish to change and then revise the tip.

Rankings on Umanity use our proprietary evaluation standard "tip deviation value" as an indicator of the abilities of tipsters. Given an average value of 50, the higher the value, the better the tipster is at predicting races. Rankings are ordered based on this tip deviation value.

- Tipster level ranking
Compared to daily rankings with its short period for gathering statistics, the monthly ranking provides data over a longer time, so this ranking provides a more comprehensive evaluation of a tipster’s ability. The level is calculated based on the tip deviation value of past tournaments over a set period of time, but it is weighted in favor of the most recent tournaments.Tipster Ranking is updated the day after end of the monthly tournament.

- Tipster rank
Rankings are indicated as in the figure below according to tipster levels. 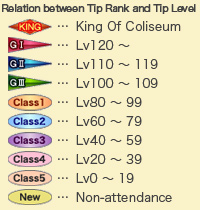 Once you become a member (free), you can see the tips of other users for free. Anyone can see tips after races are run.